The beginning of the first urban train: the tube.

To explain the origin of the London Underground we have to travel back in time to place ourselves in the Industrial Revolution. When the rural population began their exodus to the cities in search of better working conditions, they began to experience  super population phenomena. London became one of the most populated cities in the world. This led to real problems of logistics, communication and congestion in London and between London and its suburbs. In mid-nineteenth century using the occassion of some city works the idea of underground access to the city center was taken into account.

Charles Pearson, a councilor at the time, already had a rather futuristic vision subtarráneos network trains. His network design consisted of a sort of atmospheric cabs driven by compressed air.

The history of  London Underground  begins with the celebration of the Great Exhibition in 1851 when the project with the construction of the first line, known as the North Metropolitan Railway materializes. The advancement of technology, specifically the passage of steam locomotives to electric trains, was the final push to meet The Tube, as we know it today. In 1905 the vast majority of the tracks were electrified. This technological advancement, along with new techniques for building tunnels, are facts that mark the history of the London Underground.

Today the London Underground is the largest network of subways in the world. The total length of its lines is 408 kilometers, 181 of which are underground. There is also a light rail, the Docklands Light Railway, which adds 26 kms to this network. The London Underground has 275 stations and it’s used by more than 3 million users every day.

The London Underground, also known as underground or tube is the oldest underground network and also the most used in the planet. Its history has been characterized by rapidly changing. Along its route we find abandoned, renamed, relocated stations and even stations merged with other stations.

Examples of this can be found in the path of Tottenham Court Road Holborn in Central line,. We find a station without passengers since 1932 (it used to be the British Museum station).

Also in the Piccadilly Line between Green Park and Hyde Park Corner changes are observed in the construction of the wall of the tunnel. This used to be a station, Down Street, closed the same year than the British Museum. These stations are known as ghost stations.

Many stations have changed the name they were originally baptized. Normally the area where the metro station was located was renamed. In other cases the name was changed to join two stations. And even for competitive reasons as there are lines managed by different companies, usually competitors, which are close and their interest is clearly distinguished lines.

There are about 40 stations abandoned or relocated in the London underground network along its 408 km of tracks.  Some have disappeared without a trace, while others are almost intact, leaving as snapshots of the time when they were closed.

Construction of the London Underground

The development of the network of underground railways in the City has been linked to the advancement of technology. Cut and cover tunnels and deep underground tunnels: Two types of techniques have two types of tunnels underground network led.

What are cut and cover tunnels?

Cut and cover is the most obvious technology in the construction of underground tunnels, and first level deep were built with this technic. It is simply dig the route and then cover the tunnel with steel beams or some other sturdy material.
It was first used in the construction of the London Underground journey between Paddington and King’s Cross, led by Charles Pearson.

In the nineteenth century there wasn’t an efficient technology  to build tunnels as trains were mainly steam based. The depth at which they could dig the tunnels was limited by having to devise channels  to ventilate and evacuate fumes and gases from the steam. Furthermore trains size needed that the diameter of the tunnels was much higher.

The first tunnel built under the River Thames was Brunell tunnel used by east line and it was a very expensive work. When traction machines could be replaced by electricity, this scenario changed. The construction of the tunnels was simplified to be able to make smaller tunnels (being smaller trains) and then ignore all the smoke evacuation system and residues. Moreover James Henry Greathead devised a method for tunneling using compressed air which allowed dig very quickly and deeper.

The London Underground  is often incorrectly called Tube. Should refer only to certain parts of the London Underground with this name.
A metro line to be considered a line of tube must have certain characteristics: they must move underground on circular tunnels, each path must travel through a separate tunnel except at intersections and other stations. These tunnels are usually deeper relative to the level of the normal lines.

This differentiation can see in the first maps of the network. The 1929 map below distinguish between tube lines (the lines moving at a deeper level), and other major lines. 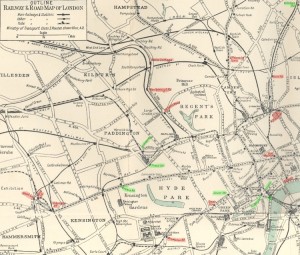